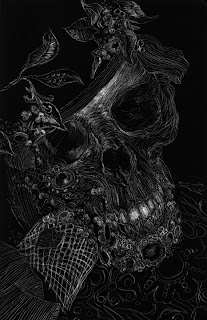 My art zine and album, "Undeath" - the series I have been showing off here for sometime - is finally ready to order from Crucial Blast.
Posted by Timothy at 1:05 AM No comments: 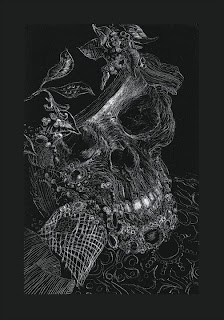 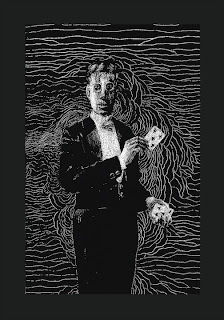 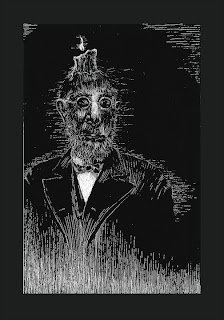 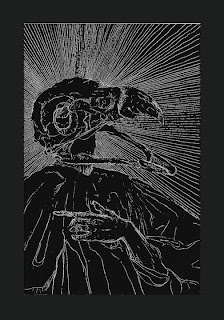 Inexpensive original art by me (in ACEO form) as well as a series of 4 limited edition prints from the Undeath series are available at the Od Peacock shop.

Posted by Timothy at 9:41 AM No comments:

The largest portion of my creative output of late has been relative to my acoustic band, Stone Breath. I've started a blog dedicated to that band and associated music/art/topics of interest. You can check it out at StoneBreath.org. 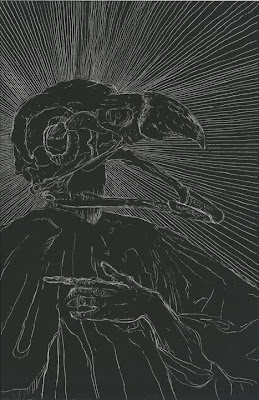 I believe I am going back to my original working title of "Undeath" for the book and the accompanying album. There is a publisher now. More details soon. In the meantime, I scratch away. Above is another piece for the series.
Posted by Timothy at 11:57 PM No comments: 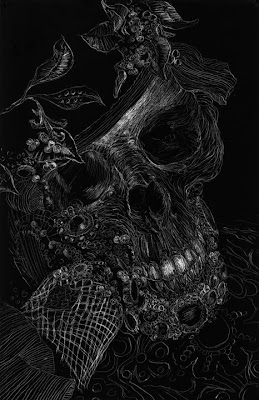 ...and now back to the ghosts and other strange spirits. This was my first ever scratchboard drawing. There will be more.
Posted by Timothy at 2:36 AM 1 comment:

Here is a series I have started of small moth drawings. Each drawing is approximately 4" square. These are for sale... I would like to get $40.00 for each of these. They can be professionally framed for another $50.00...There will be more to come.
First is an unidentified moth: 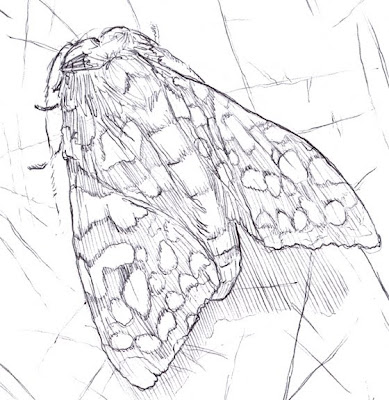 Next is my favorite moth, the Luna Moth: 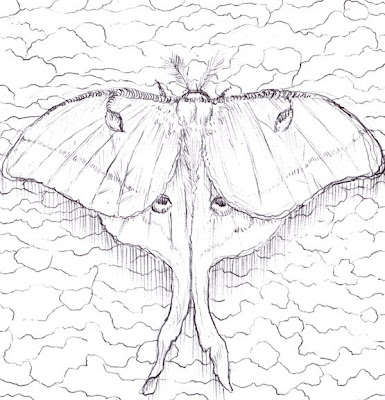 ...and my favorite drawing of the series so far, the Salt Marsh Moth: 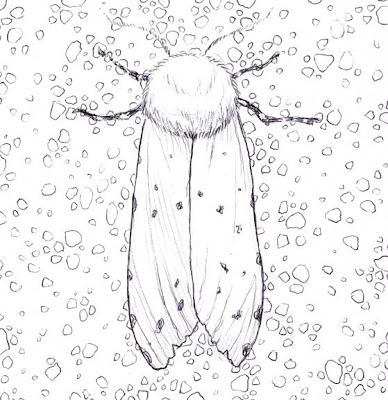 Please contact me revelator(at)lostgospel.org if you would like to purchase a moth or any of my artwork.
Posted by Timothy at 2:20 AM No comments: 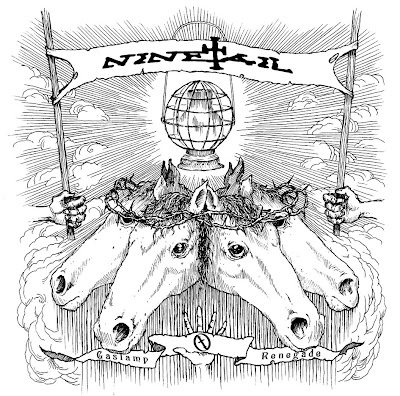 It's been a busy time. I have had to put the ghost art and music to the side while I attend to some pressing matters, both creative and otherwise. Don Belch (of Ninetail and lately also of Stone Breath) and I built a silkscreen press. The first shirt we did was for Ninetail, based on one of their new batch of songs, called "Gaslamp Renegade." I did the illustration (pen & ink on illustration board). If anyone wants one of these shirts, contact me and I can either get you one or put you in touch with Ninetail.
On the musical front, we've been working on Stone Breath - we are finishing up the new album which is to be called "The Night Birds Psalm (and other songs we sung beneath the silver web)." Before "The Night Birds Psalm" arrives though, we will have a split LP ...and we will compile that material with more new songs and that will make another Stone Breath full length. All of this will happen, probably, in 2011. I am hard at work figuring out the artwork for both of these albums now. It will be different from the illuminations I did for "The Shepherdess and the Bone-White Bird."
As soon as possible though, I'll get back to the ghost/spirit art & music and that means, possibly another release in 2011 from me - besides all of the Stone Breath material - my "solo" album (with guests), timeMOTHeye and the Spectral Light.
Posted by Timothy at 12:51 PM No comments: